The Dryden Lacrosse Program was started in the Summer and Fall of 2000 by Marty Christofferson. There were informal practices held 1 day a week at Montgomery Park in the Village of Dryden. There was an average of 8-12 kids. In 2001 the program became part of the Town of Dryden Recreation Department. By 2003 there were 48 players participating. In 2004 there were 44 players in the youth program and the modified program had 23 players. 2005 saw the addition of a JV team at Dryden Central Schools as an unfunded program. The youth program numbers grew into the 50's. In 2006 DCS again had a boys JV team. A girls JV team was started. In 2007 the youth program currently has 65 players on board and DSC has JV Girls and JV Boys teams and our first Boys Varsity Team. All school teams remain unfunded but supported by the school. Funds are raised by all levels of Dryden Lax - from the youngest 5 year old youth player up through the seniors and the always important Lax Parents.

Update - Spring of 2009. DCS has a Boys Modified, Boys Varsity and Girls JV Team. Lacrosse (boys and girls) has become partially funded by the school district for the 2009-2010 season. Youth level girls lacrosse is added to the schools JV offering.

Spring of 2010 - Boys lacrosse had Modified and Varsity levels again. Both teams posted program bests for wins. Our second year of being partially funded by the school (transportation).

Spring 2011 - Boys have JV and Varsity.  Girls have first year at the Varsity Level.  Girls also have Modified Team

Spring 2012 - Boys have Modified and Varsity.  Boys Varsity ties school record for wins.  Girls team gets the program first Varsity wins. Dryden Boys and Dryden Girls each win US Lacrosse Equipment Grants in the fall of 2011.  The new equipment allows more boys and girls to participate.

Spring 2013 - Boys Varsity and Modified.  Varsity sets the record for most wins in a season and gets the first program wins over Seton Catholic and Owego.   They also make the playoffs for the first time ever.  Girls get only one win but it is a great comeback over Chenango Forks on the last day of the season. Click Here for Story

Spring  2014 - Varsity finished 6-10 and just misses a second consecutive year of sectional playoffs.  Unfortunately there were not enough players to field a girls team this year.  Next year looks promising to bring the girls back into the mix since the Dryden BOE has added Varsity Boys and Varsity Girls Lacrosse as well as Varsity Golf into the fully funded sports in Dryden.    Another exciting development is the Dicks Sporting Goods SportsMatter campaign.  Dryden Lax applies and is chosen as one of 180 teams.  Our Goal is $17500.  We had to raise half and Dicks would fund the other half.  We met our goal and now have the funds to help the school get the fully funded boys program off the ground.  The BOE hopes to fund modified next year.

Spring 2015 - First fully funded year (head coaches get full salary, not just the partial fee they received from the respective clubs).   Boys have Modified (partially funded) and Varsity.  Girls Lacrosse is back as a JV team with Coach Bryn Sheppard who replaces Charlie Dardia who moved onto Modified Boys lax when the girls did not have a team in 2014.

Spring 2016 - Second year of being fully funded and Modified is now funded for boys and girls and Girls move up to having a Varsity team with Coach Bryn Sheppard.   New Coach at the Boys Varsity Level is Chris Dotson. Their 4 coach since varsity play started in 200.7 He replaces Butch McGuerty who coached for 5 years (four unfunded and 1 funded) with several volunteer assistant coaches.  Butch leaves with the most wins in program history. (25)
** UPDATE ** - 3331 days after the very first Dryden Varsity Lacrosse game that was played at Union Endicott, They win at Union Endicott in OT.  Tonight, in our 10th season, Dryden lacrosse recorded it's 41st win and more importantly it's 8th of the season.  It's a new team record for wins in a season and guarantee's a .500 regular season record.

Spring 2017 -  Coach Dotson leaves to follow a new Job.  Charlie Dardia who has worked with the youth program for years, coached and grew the girls program and most recently was the modified coach is now the head coach.

The Boys Varsity Lacrosse  team was the 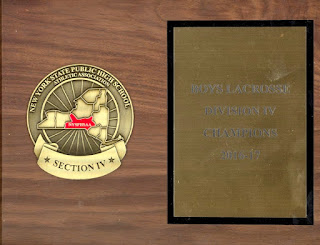 2017 Section IV Division 4 Champion. (first in program history, this is the 11th season and 10th anniversary of the first varsity season)
They were also voted to be the recipient of the Bowie Sportsmanship Award by game officials (referees). They were chosen out of all Class C and Class D teams in the section.
Dryden Lacrosse was also a NYSPHSAA Scholar Athlete TEAM.  And for the first time ever, the team made the honorable mention ranking in the State for Class D Schools (We are Class D in Lacrosse)

Being a new program, there is not a Championship Banner in the gym for Lacrosse. The Sports Boosters approved a request by Mr. Ford last night to purchase a new banner so this championship year can be included on the walls with all the other sport’s championships.
UPDATE - The Lacrosse Championship Banner is now proudly displayed in the High School Gym.
Posted by Lance Cole at 2:42 PM No comments: