Mod Lax Improves to 3-2 on Season 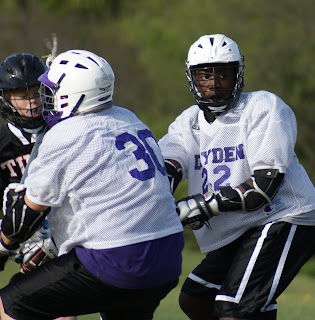 After falling to Horseheads, 7-4, in a hard fought battle on Monday night, the Boys Modified Lacrosse team rebounded with a 7-4 victory over Tully on Wednesday night. The score was 4-2 in favor of the visiting Black Knights at half time. Dryden started the third quarter with two quick unanswered goals to draw even with Tully. When the quarter ended it was 6-4 in favor of the Lions. Several great defensive stands and another insurance goal sealed the win for the home team. This was the first win of the season against an established program (Elmira is in their first year) and one the team and coaches should be proud of. They have come a long way from that first practice on March 23rd.

Three games remain. The team travels to Ithaca on Tuesday the 19th for possibly their toughest game of the season against a good Ithaca team. On Friday the 22nd they will try to avenge an earlier lose as they travel to Horseheads. They finish up the season with a rematch in Tully on Thursday the 28th.

Horseheads Photos
Posted by Lance Cole at 7:36 AM

Several great defensive stands and another insurance goal sealed the win for the home team.Lacrosse Gloves