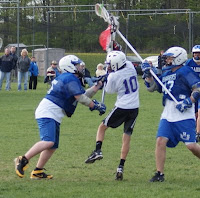 With a overtime 9-8 win at Horseheads on Tuesday the Boys Modified Lacrosse Team improved to 4-3 on the season. It was a hard fought, back and forth battle in a constant downpour, as Horseheads tied the game with less than 30 seconds left in the game. A few minutes later and a quick feed to the crease, the guys had their 4th win. It was the last game of the season for the 9th graders.

The team, Coach Kamp and Coach Federation should be proud of what they have accomplished this season. They have continued to improved as the season progressed and have gelled nicely as a team.

They finish the season with a trip to Tully (home of two time NCAA champ and SU star Dan Hardy) this afternoon.
Posted by Lance Cole at 3:11 PM

Modified Lax finished season with a 9-4 win over Tully and a 5-3 record.

I would never want to miss out any opportunity to read out your contents.Lacrosse Stick