Modified gives Forks all they can handle - 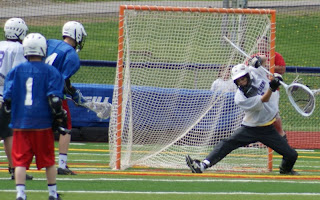 On a beautiful Saturday morning, on the brand new "Field Turf" of Blue Devil Stadium, the Dryden Modified Boys Lax team held their own with an experienced Forks team. The first half ended in a 1-1 tie. Several defensive stands coupled with Eric Foote's exceptional performance between the pipes kept the game close. The offense had several opportunities only to be turned back by an equally exceptional performance by the blue Devils goalie.

Forks scored a couple of quick goals as the third quarter got underway, but the team continued to play well and kept the score within reach. As the final horn blew the Dryden fans (we had a great turnout for the away game !!) knew that even though the score said 6-3, the Team and coaches should be proud of an impressive performance against a good team. (see link below for game photos)

Dryden hosts Elmira on Tuesday. There will be a tailgate party after the game. I don't have all the details but I believe we will have an added game on Friday at Union Edicott. (stay tuned) The team travels to Horseheads next Tuesday.

The offense had several opportunities only to be turned back by an equally exceptional performance by the blue Devils goalie.this site