Come Watch Dryden Alum, Jordan Zehr​ and the Albright Lions take on the Cortland Red Dragons on Thursday March 5th.  See note below from Cortland regarding the stadium bleachers being closed.

The Cortland men's lacrosse team has announced the make-up date for its game against Albright that was postponed due to inclement weather. The Red Dragons and the Lions will meet at the Stadium Complex on Thursday, Mar. 5, 3:30 p.m., and the contest will be Cortland's home-opening game. Due to the severity of the winter weather, the Stadium bleachers will be closed and spectator viewing is available as standing room only behind the north end zone of the Stadium. Admission to the game is free.
Posted by Lance Cole at 11:43 AM No comments:

Lax on TV this weekend

Posted by Lance Cole at 8:34 AM No comments:

Click on the following to get your 20% OFF Coupon for Lacrosse Items at Dicks on February 28th and March 1st, 2015 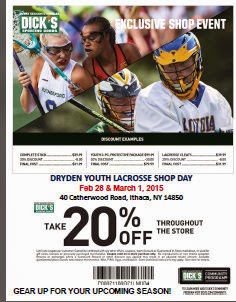 Posted by Lance Cole at 3:26 PM No comments:

Link to the Lax Power Schedule - (not official)

Posted by Lance Cole at 1:07 PM No comments:

The "V-Chanel / shooting strings" rule that had been changed for 2015 has been moved to 2016.   It's similar to the rule the NCAA went with a few years ago.  For juniors and younger it might be a good time to start testing new shooting string locations that fall within the rules to be ready for 2016.

The 2" length of strings has been in the rules for a couple of years.

ART. 3 . . . Any strings or leathers are limited to a hanging length of 2 inches. All hollow crosse handles must have their open end covered with an end cap manufactured for a lacrosse stick. In both cases, the crosse shall not be considered illegal; however, it shall be removed from the game until corrected.
Any additional strings or laces (e.g., shooting strings, V channels) must be located within 4 inches of the top of the crosse. No more than one side wall string on each side is allowed.
It should be noted that the first paragraph of Rule 1-7-3 will still be implemented for the 2015 season. Only the second, underlined part will be delayed until 2016.
Posted by Lance Cole at 12:30 PM No comments: